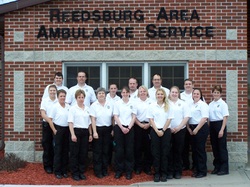 Reedsburg Area Ambulance Service started serving the community in 1973 with several ambulance attendants. The service operated with one ambulance out of a one room garage located on Vine Street in Reedsburg. This building served as our bay for 25 years until, in 1998, we were able to build a larger building on Railroad Street to meet the growing needs of the area, house our three ambulances and provide quarters for our present crew. This building provides three sleep rooms, a training room, an office area and an attached garage for the ambulances. In 2014 the ambulance service added a 900 square foot addition to the front of its existing bays so there would be room for six vehicles, which means there is room for future growth of the service. ​

In 2015, through a partnership with Reedsburg Area Medical Center and Home Health United, the Mobile Integrated Health program was started. Through this program, paramedics conduct a home visit of patients who are released from Reedsburg Area Medical Center. The paramedics also follow up with the patient four times over the next month discussing their progress and transition from being in the hospital to being at home. The overall goal of the program is to reduce hospital readmissions.